Last Wednesday, my friends and I decided to take a train to go up north to the Louisiana Museum for Modern Arts. It is located approximately 35km north of Copenhagen, right on the shore of the Øresund. With around 500,000 visitors per year it is the most visited museum of Denmark.

In the Introduction Week of our programme one of our teachers mentioned a collaboration of Yayoi Kusama and Louis Vuitton (polka dot fashion) and a magazine photo shoot of George Clooney wearing clothes customised by Kusama. In the shoot for W Magazine, George Clooney was portrayed in a polka dot Giorgio Armani suit customised by Kusama. Most recently an exhibition about Kusama had opened, many in our programme have already been to the exhibition at Louisiana and some made plans to go there soon. So we decided to go there as well.

The exhibition is called “In Infinity” and features visual art, performance, film, literature and design, which was created by Kusama in the past 60+ years. Yayoi Kusama is a very interesting person. Born in Japan in 1929, she started creating art at a very early age. She moved to New York for some time as she was frustrated with Japanese style. Kusama embraced the Hippie movement and organised a few happenings involving naked people covered in polka dots in New York City. She moved back to Japan in the 70ies and voluntarily admitted herself to a private psychiatric hospital, where she’s been staying since. 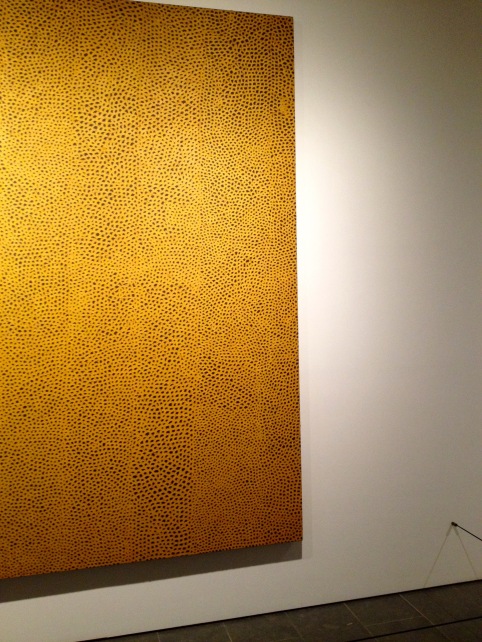 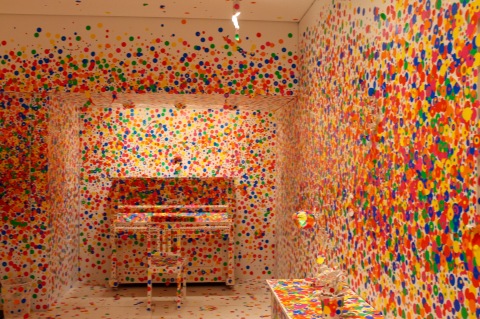 A polka-dot has the form of the sun, which is a symbol of the energy of the whole world and our living life, and also the form of the moon, which is calm. Round, soft, colorful, senseless and unknowing. Polka-dots become movement … Polka dots are a way to infinity.

Polka dots are a trademark of her work. Entire rooms were covered in them, especially rooms with mirrors (which she calls ‘Mirror Rooms’ or ‘Infinity Rooms’). Another interesting part of the exhibition was the importance of pumpkins. According to this source, pumpkins are representatives of her alter-ego or self-portrait. 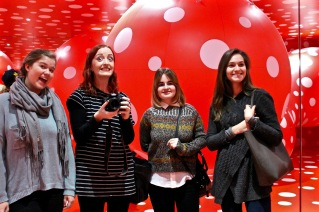 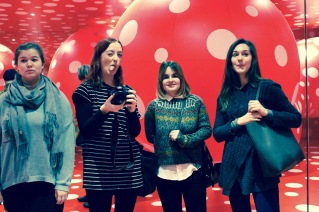 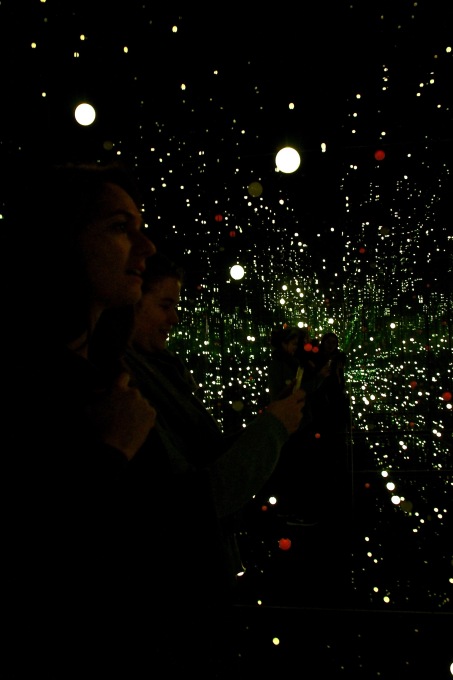 Although Modern Art is usually not the type of art that I can truly enjoy, I really liked this exhibition. For my taste there were way too many intended phallic symbols in some of her work, and a few pieces were just plain weird. However, the light installations were beautiful, the infinity/mirror rooms were amazing and the infinity nets are something that I could even imagine having at home. So if you ever have the chance to go to an exhibition of Kusama’s art – take it, I highly recommend it :)

It was snowing for the first time last weekend!!! I couldn’t believe my eyes when the tiny flocks were falling down in front of my window. So beautiful :) (I am a sucker for snowflakes). However, it did not take long for it to melt away :(