Very high on my travel agenda is to visit all eight of Austria’s neighbouring countries. I have already talked about this little ‘dream of mine’ in my Vaduz post. As Liechtenstein is right next to the beautiful country Switzerland, why not go there as well? So my little summer travel adventure brought me to another neighbouring country of Austria that I’ve wanted to visit for a long time.

Switzerland is located in the heart of Europe, and with 8.3 mio inhabitants it is almost as big (small) as Austria. Switzerland has the highest nominal wealth per adult and the eight highest GDP per capita. It is the birthplace of the Red Cross, famous for its neutrality, financial sector, quality of living, and of course – fondue. There are some cheap options to travel to Switzerland from Austria if you plan your trip ahead, so we bought really cheap bus tickets and went to the city Zürich for one day. Why Zürich? It is one of the closest cities to the Austrian border and it’s supposed to be beautiful.

Exploring the city.
The day started out to be a bit cloudy with a high chance of rain, but this just made the city even more impressive and gave it a special touch. Plus, walking around in the broiling heat is too exhausting anyways! After arriving in Zürich we headed to the tourist info to get a map. We decided to loosely follow a suggested route for the first quarter of our day in town. A place that somehow fascinated me was the Sechseläutenplatz, the largest town square of the city right in front of the opera. The name of the square (Sechseläuten) is derived from a traditional spring holiday. It is a huge ’empty’ space, with a fountain that is perfect for kids to run through. People were just sitting on the square, either on the ground or on chairs, while having a chat with each other or watching kids who were enjoying the fountain. Well, I cannot really tell you why it fascinated me so much, I kind of just fell in love with the square for no apparent reason I guess :D

Exploring the riverside.
Right through the heart of the city runs the river Limmat. While walking along the river and crossing it a few times, we got to see (old) buildings with beautiful facades such as the Frauenmünster church (which can be seen from almost any place in town I guess?), and of course – ‘special’ cars :D 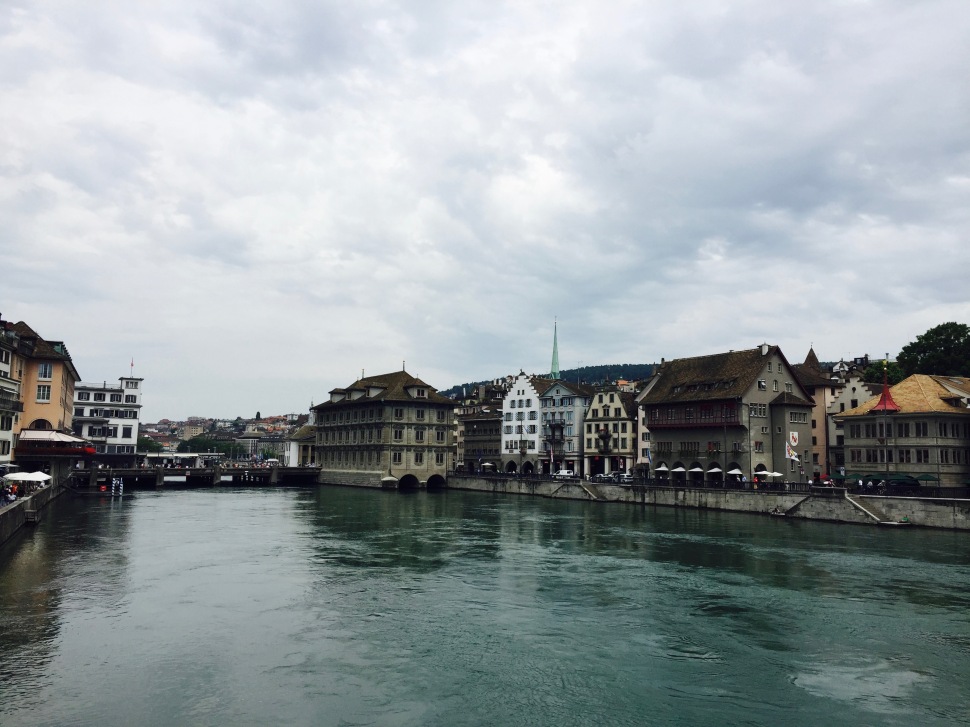 Enjoying the lake.
There’s not only a river (actually there are two that run through the city, but we did not go to the Sihl), but also a lake! Yay! Zürich is located on the north-west end of the Lake Zürich. I’m just a sucker for lakes, so naturally, my lake-loving heart was drawn to it. There were boats on the lake, birds floating around & being fed by people. Also, the Manifesta (European Biennale of Contemporary Art) was taking place at the time, so there was a Pavillon of Reflection (the wooden building) on the lake. We were sitting on the Quaianlagen (quaysides) for a bit, watching people, birds and the city, while listening to an accordean player. Quite nice I must say. 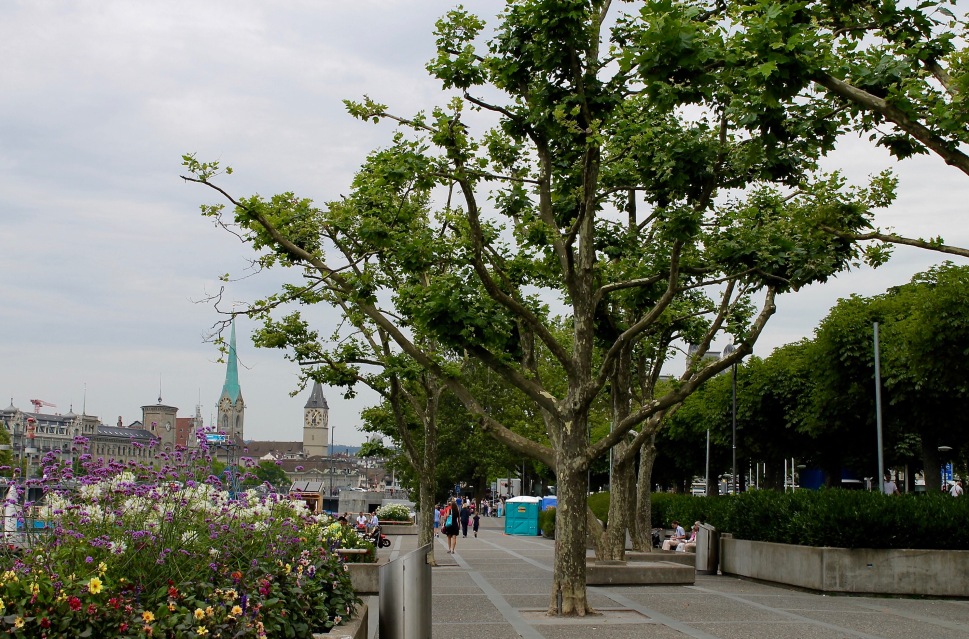 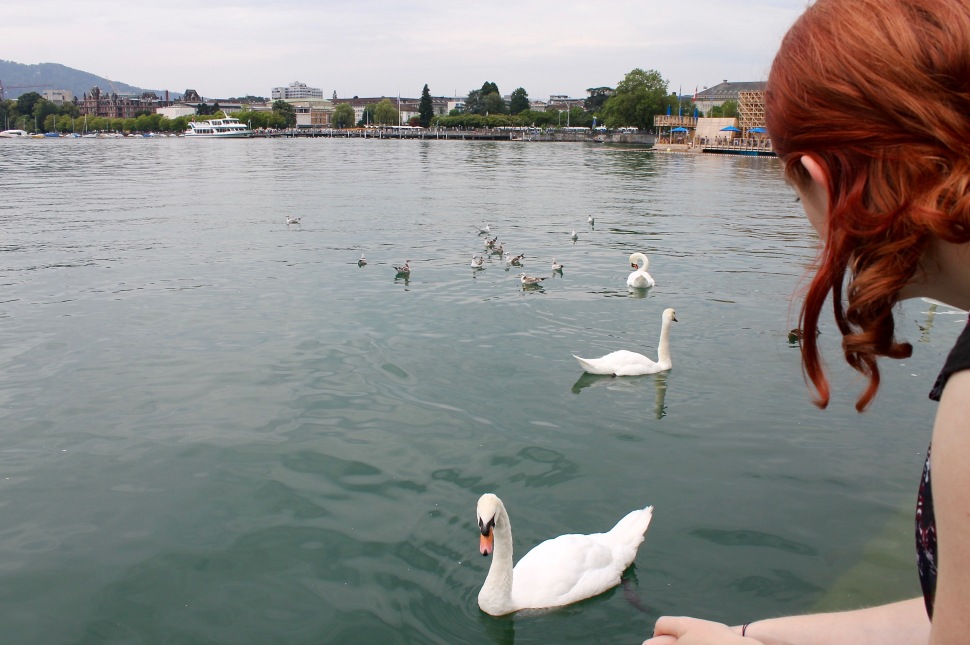 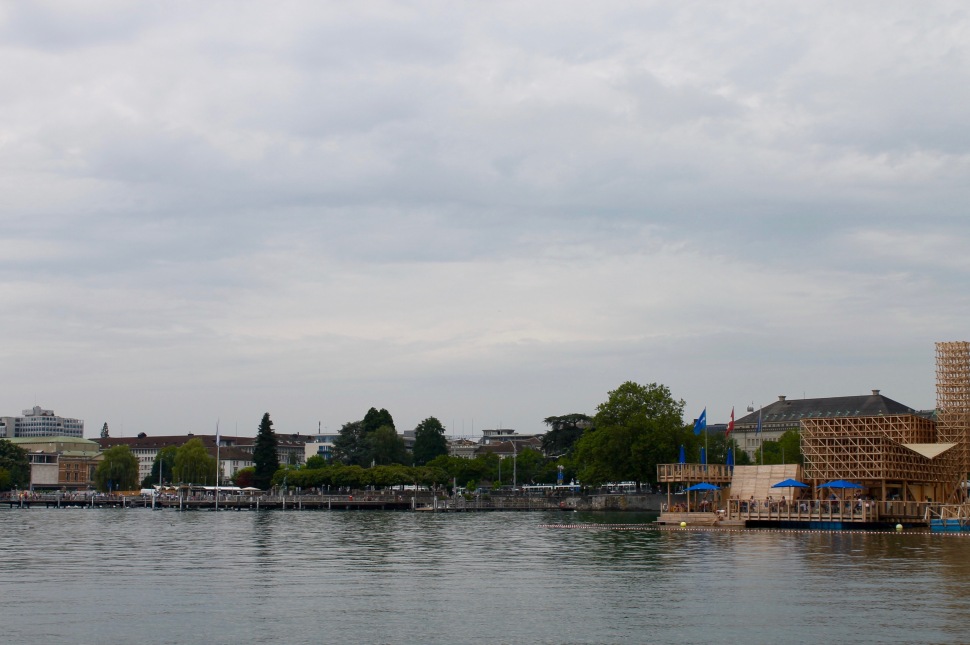 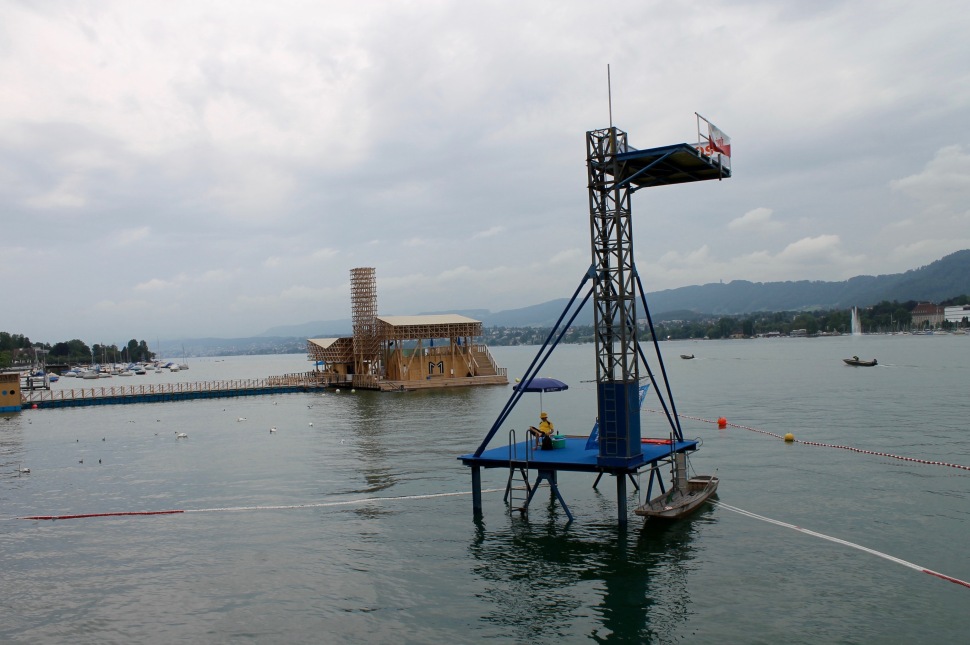 Where to find Food?!
Naturally, we had to go someplace at some time to eat. What a dreadful question in such an expensive country! We toyed with the idea of having fondue… but a) it was summer and for us fondue is more a winter food, and b) it would have been freaking expensive (at least at the places where we had a look at). haha. Luckily, we’d done a little research before so we wouldn’t be at a total loss. Deciding against the oldest vegetarian restaurant in the world (since 1898!!!!) – the Hiltl – for reasons such as assumed high prices and too many people, we opted for the Gärtnerei, which was right next to the Hiltl. Our online research had already convinced us beforehand – the Gärtnerei focuses on healthy food and sustainability, and offers veggie & vegan options. Unfortunately, they had already closed the grill for the day when we arrived, so we had a huge bowl of salad instead of burgers. Very delicious and filling though! :) 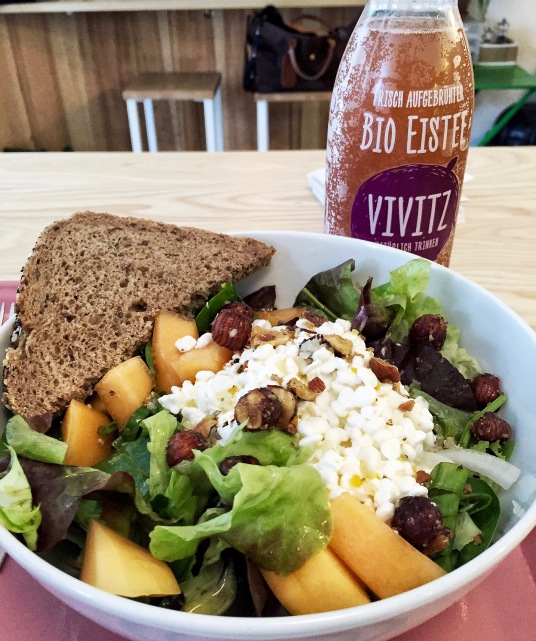 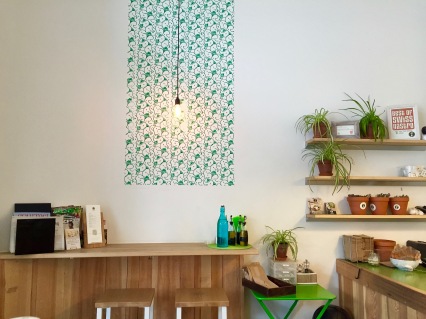 Visiting the ETH and enjoying the view.
After having lunch there was a small thunderstorm with lots and lots of rain. It really came down in buckets. We had no idea what to do or where to go due to a lack of wifi and inspiration, so we tried to wait it out under a roofing. But there seemed to be no end to it. So we made the decision to take the Polybahn funicular that would bring us to the famous ETH – the Swiss Federal Institute of Technology in Zürich, a science, technology, engineering, mathematics & management university in Switzerland, which is consistently ranked under the top universities in the world and with 21 Nobel Prize winners being students or professors of the institute (such as Albert Einstein or Niels Bohr). As a physics student himself, my bf wanted to go and see the place anyways, so why not? Plus, the view over the city on top of the hill was just amazing, and there were Enzis (plastic furniture) from Vienna. 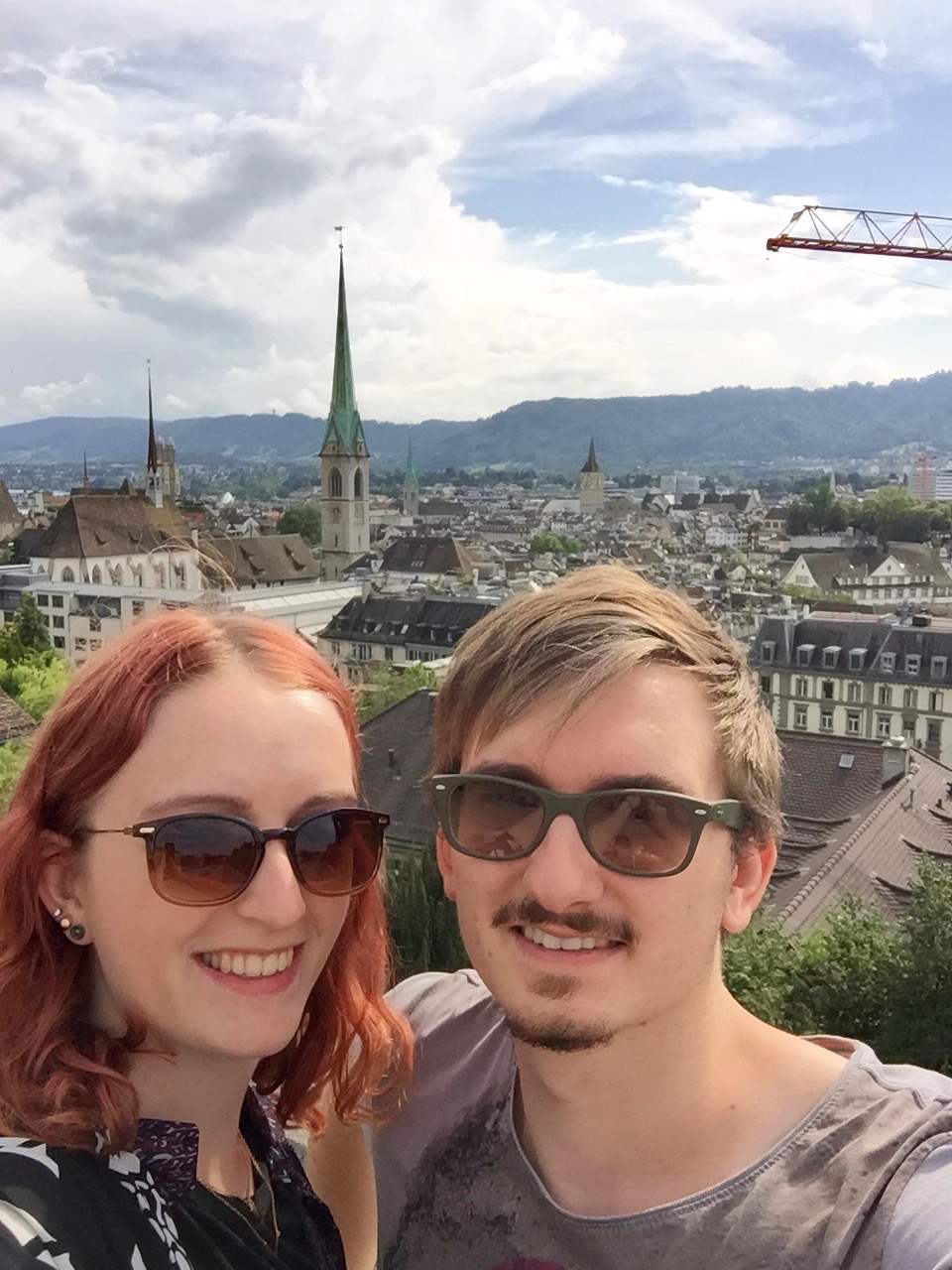 Enjoying the sun and the view from the Lindenhof hill.
We stayed inside the uni for a while (to use the wifi and to get away from the bad weather), and when we got out again we couldn’t believe it – there was the sun again!! Unfortunately, we only had a bit over an hour left for walking around while the sun was out before we had to catch our bus back home. No further words needed – enjoy the last pictures of our trip :) 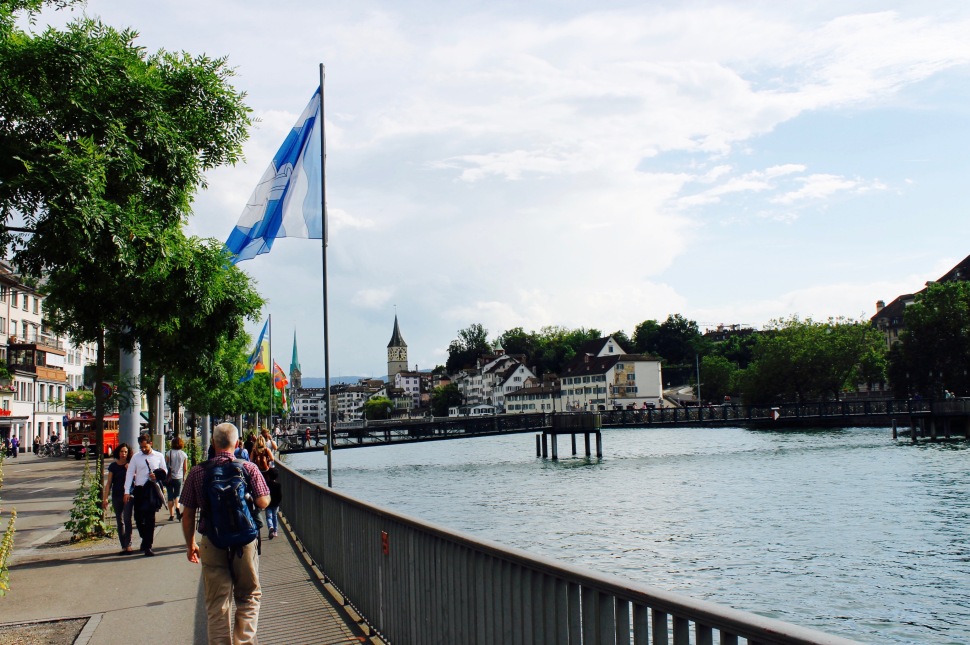 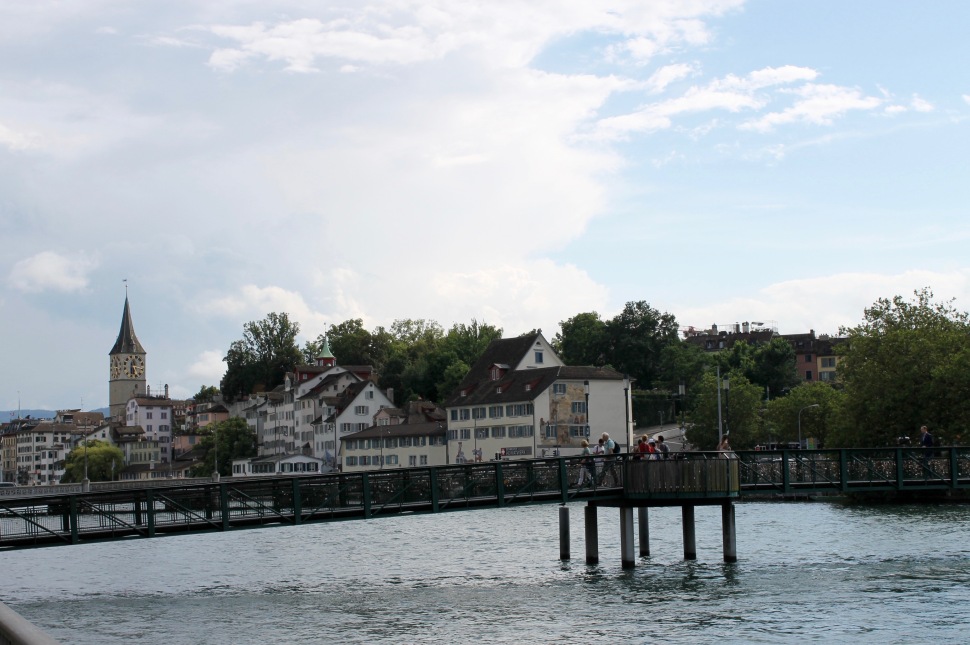 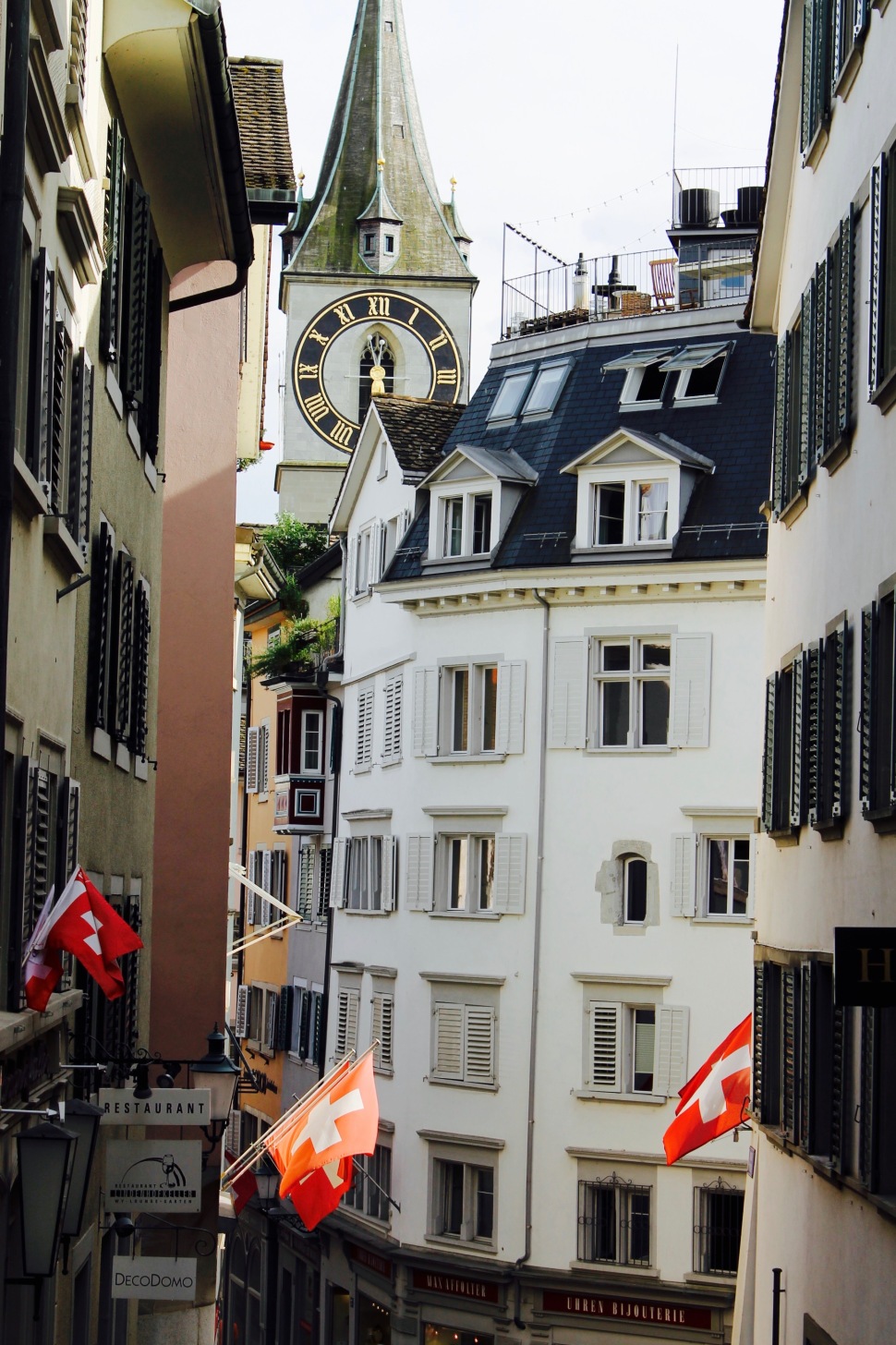 One day was definitely not enough for such a wonderful city that Zürich turned out to be. I immediately fell in love with it, and we already made plans for retiring there (provided we will be rich by then).

For any of you thinking of going there I would totally recommend just having a casual walk through the city while looking at everything and enjoying the day in Zürich. :)