A while ago when doing research about potential travel destinations within Russia I came across Kazan. I haven’t really heard much about the city before, I only knew that it was one of the megapolises of Russia. A quick google search told me that the architecture was supposed to be different from other Russian cities so of course I was hooked immediately and the decision was made to go there at some point. Some friends were easily convinced to tag along, so my old travel pal Madlene and I abandoned our former travel group members Frederik and Marcel and got us a new crew. Together with Monika, Viktoria, Daan and Ghezal we spent a weekend in Kazan.

Kazan is the capital and the largest city of the Republic of Tatarstan. With a population of around 1.14 million people it is also the eighth largest one in Russia. The city lies at the confluence of the Volga and the Kazanka River. The most special aspect of Kazan is the mix between East and West / Muslim and Orthodox. Apparently it is also one of the most tourist-friendly cities of Russia. Yay!

People are proud of their culture and try to preserve it, which can also be seen on state level. Tatar language is official – students must learn it at school. Signs are written both in Russian and Tatar. In that sense it is not a typical Russian city which makes it even more interesting. In 2009 Kazan got the right to brand the city as the ‘Third Capital’ of Russia. The city has a rich industrial side, and is a cultural and educational centre. Kazan federal university for example is the oldest university in Russia.

Due to its continental and far inland position, Kazan has a humid continental climate which includes long, cold winters (it’s even colder than in some areas further west in Europe, eg Moscow). In December the average low is -11.4°C and the record low is -42.9°C. Freaking cold!

While driving from the airport to our hostel we already passed many beautiful buildings that gave us a first impression of the city. Even though our cab ride was ridiculously overpriced (for Russia at least) our driver was very nice and tried to explain most of the buidlings and told us interesting things of the city. Some we understood and some we didn’t, but Google our friend and helper filled the gaps. The thing that sticked out the most were all the sports related buildings in the outskirts of the city. We learned that in 2013 the Summer Universiade – an international multi-sport event for university athletes – was held there (also referred to as World University Games, or World Student Games). It is the largest multi-sport event in the world apart from the Olympic Games. Apparently it was the most northern held Summer Universiade thus far. Also, in 2009 the city was chosen as the ‘Sports capital of Russia’. 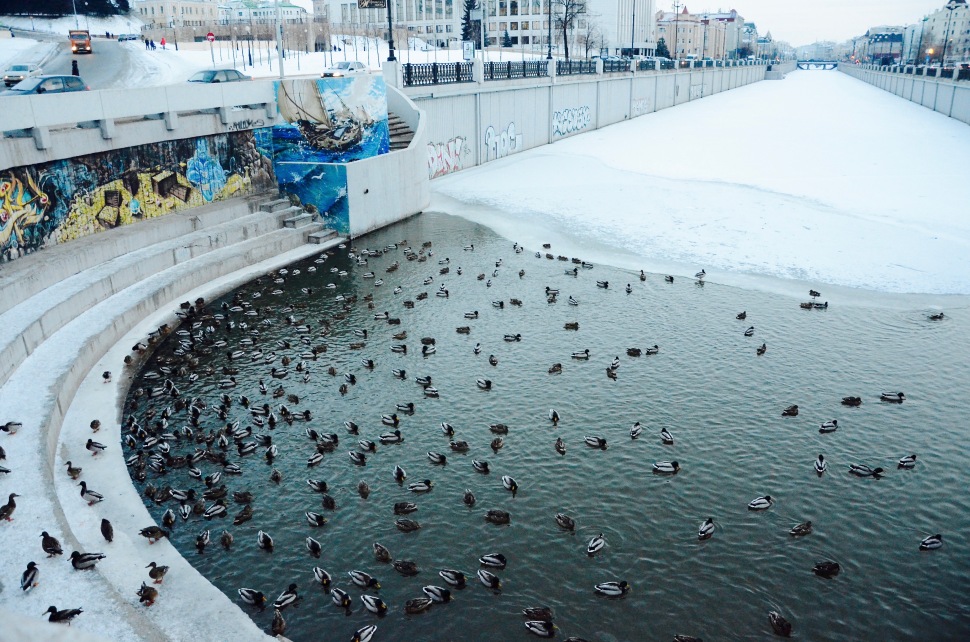 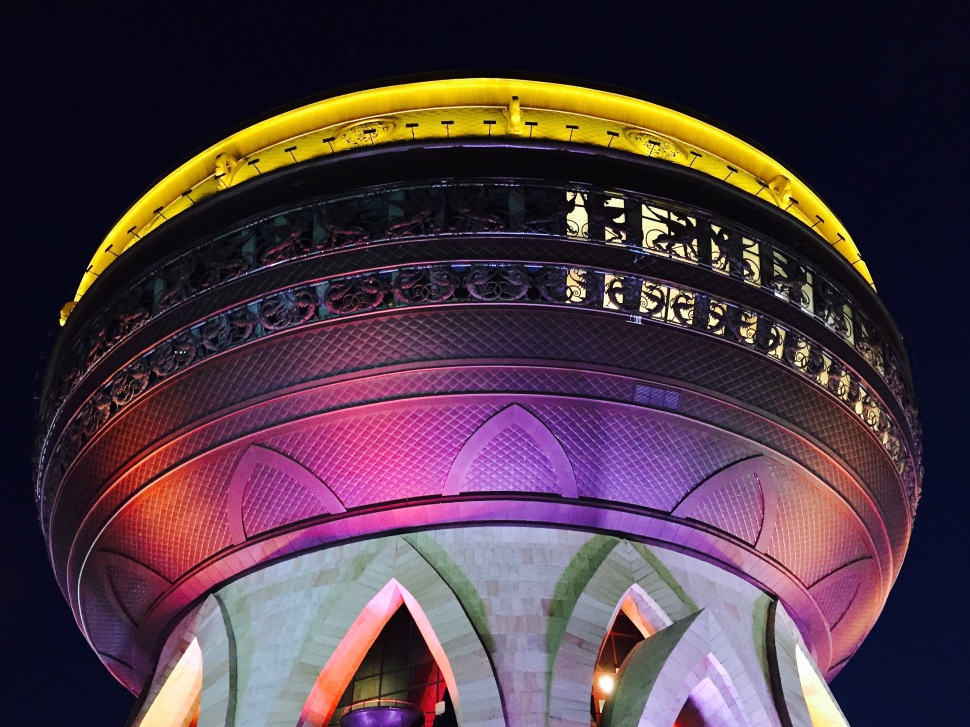 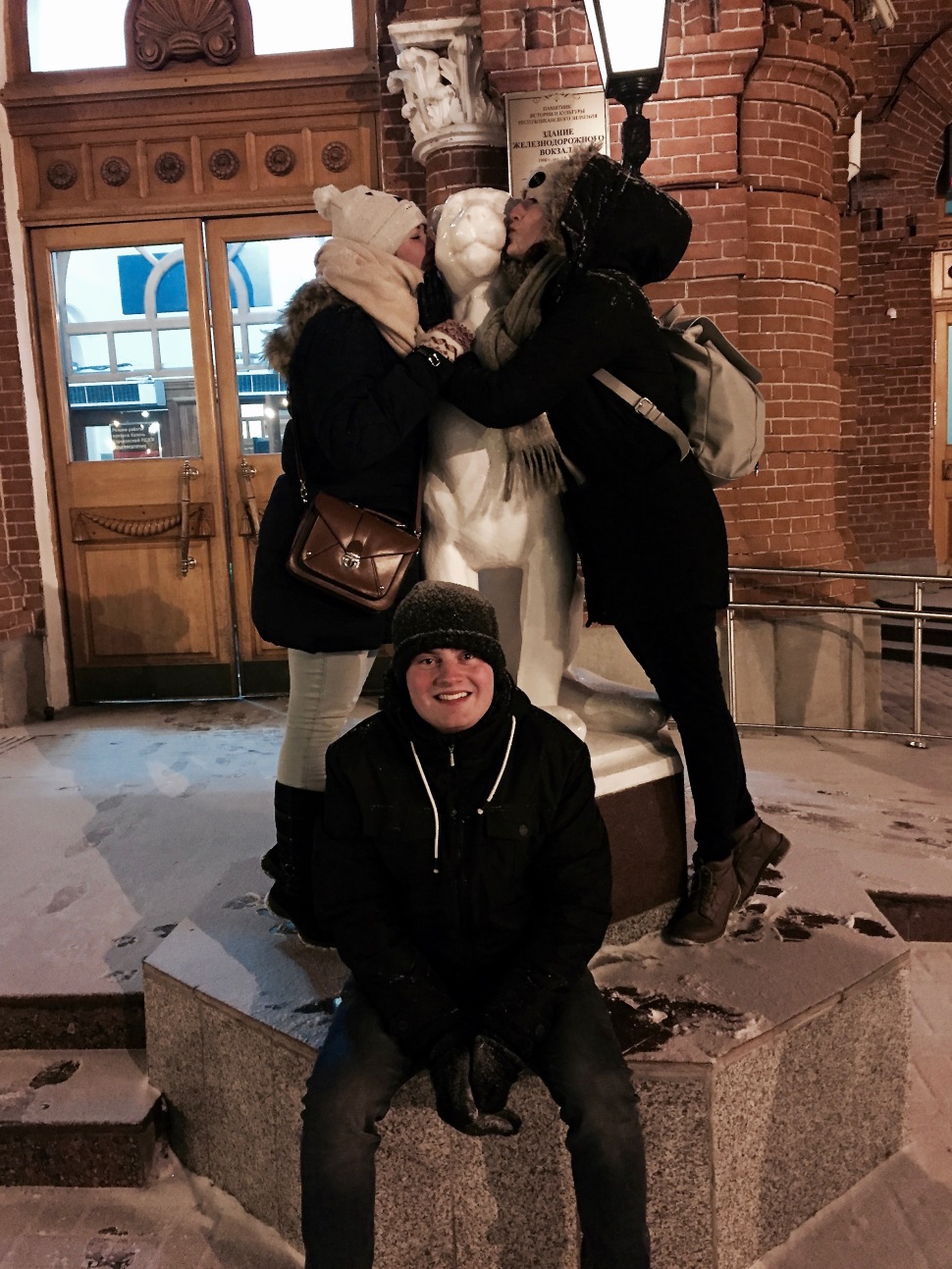 Within the Kazan Kremlin walls

As in many other cities in Russia there is also a Kremlin (or in Tatar kirman) in Kazan which was declared a World Heritage Site in 2000. The skyline of the city is dominated by its beautiful fortress. Inside the white walls of the citadel there are various major monuments such as the Annunciation Cathedral, the leaning Soyembika Tower, or the Qol-Şarif mosque. Also, the central government of the republic is located within the walls. The kremlin is located on a relatively high point of Kazan so we also had a very nice view over the city and the frozen river.

The Qol-Şarif mosque is the biggest mosque in Europe. Before Kazan was conquered by Ivan the Terrible in 1552, there used to be a white mosque with blue domes and minarets, and it used to be the capital of the Kazan Khanate. In the years after that the native population, Tatars, were massacred or forcibly christianized. In 2005 the mosque was rebuilt in honor of the Kazan’s Millenium Jubilee (yes, apparently the city is one of the oldest ones in Russia). It represents a new symbol of Kazan and Tatarstan – ‘a bridge connecting the past and future’. The mosque got its name to honour the imam who was killed by Ivan the Terrible’s troops in 1552 while trying to protect the city. 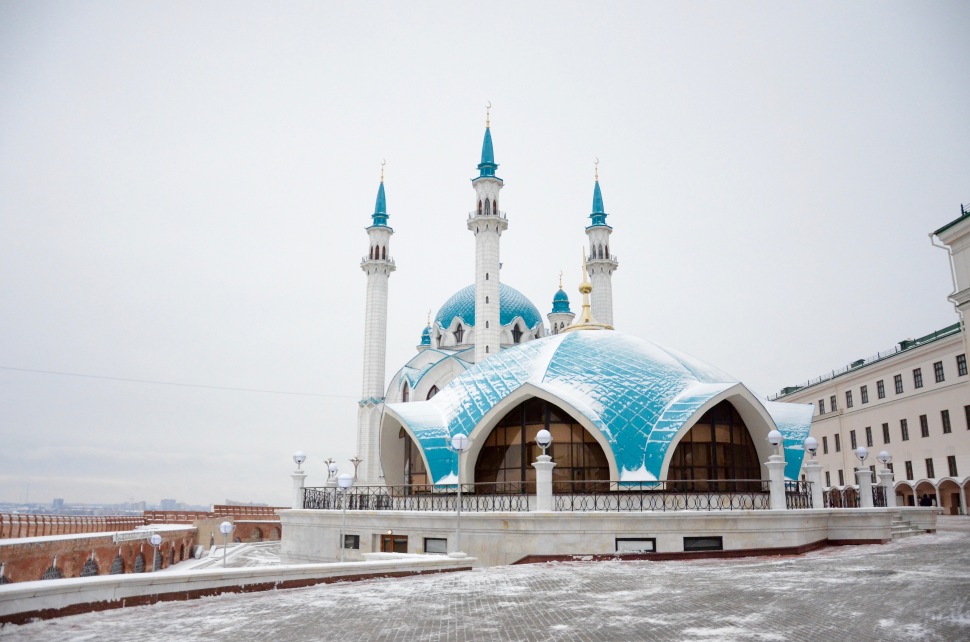 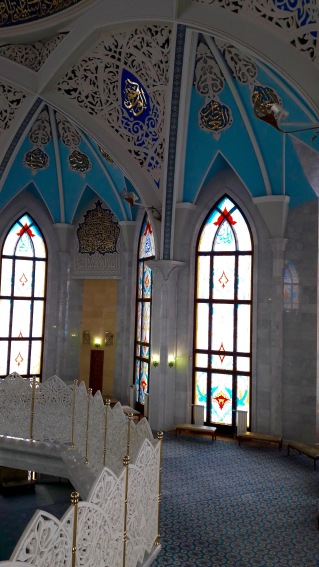 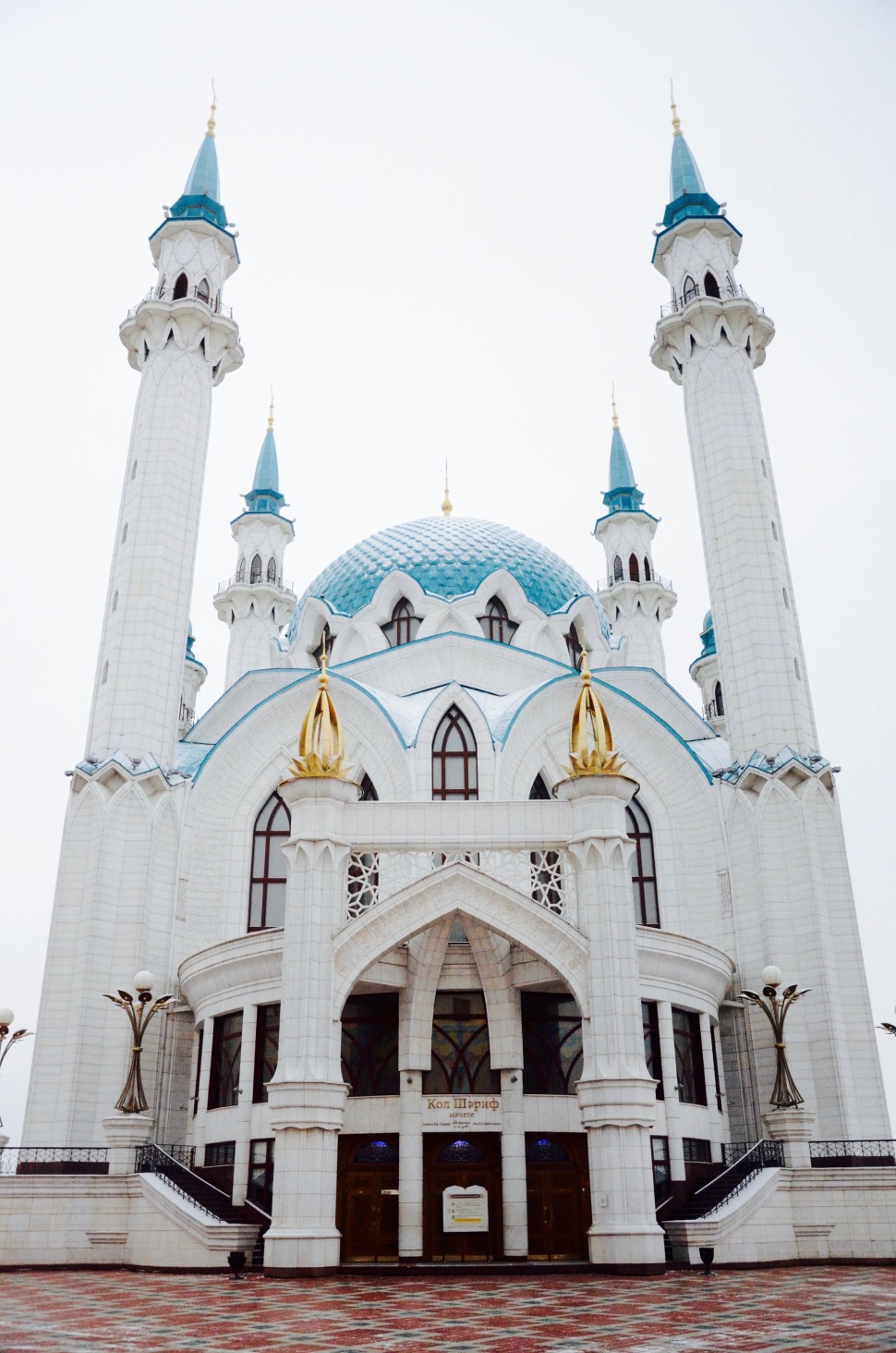 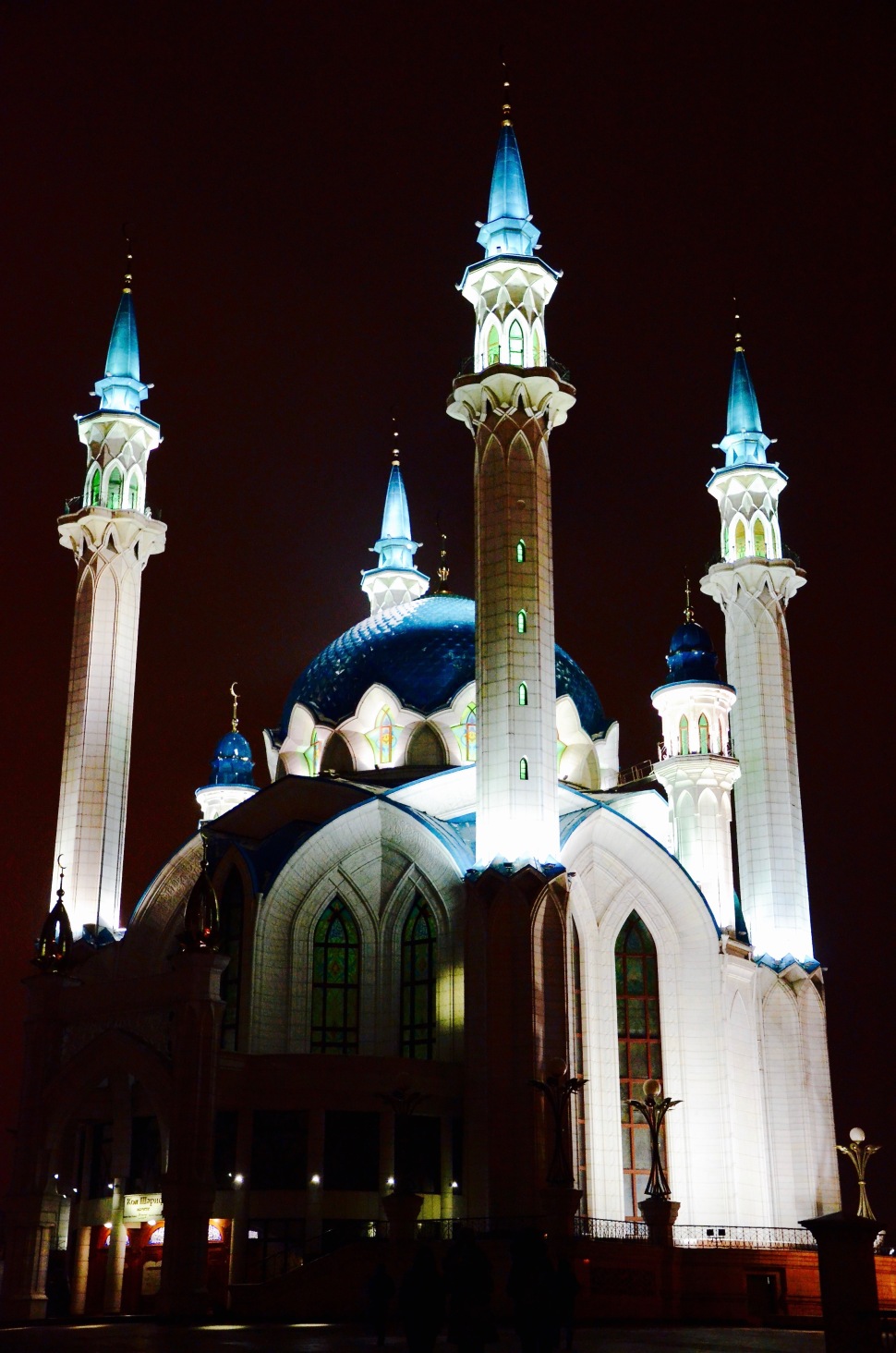 The cathedral inside the Kremlin was built in 1561-62 and is the only 16th-century Russian church to have six columns and five domes. Interesting fact, right? 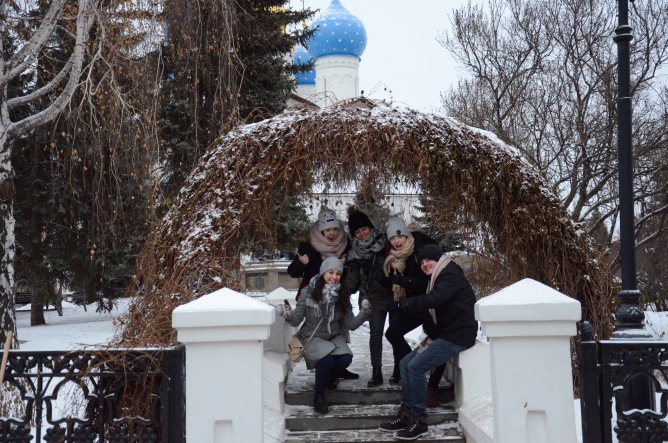 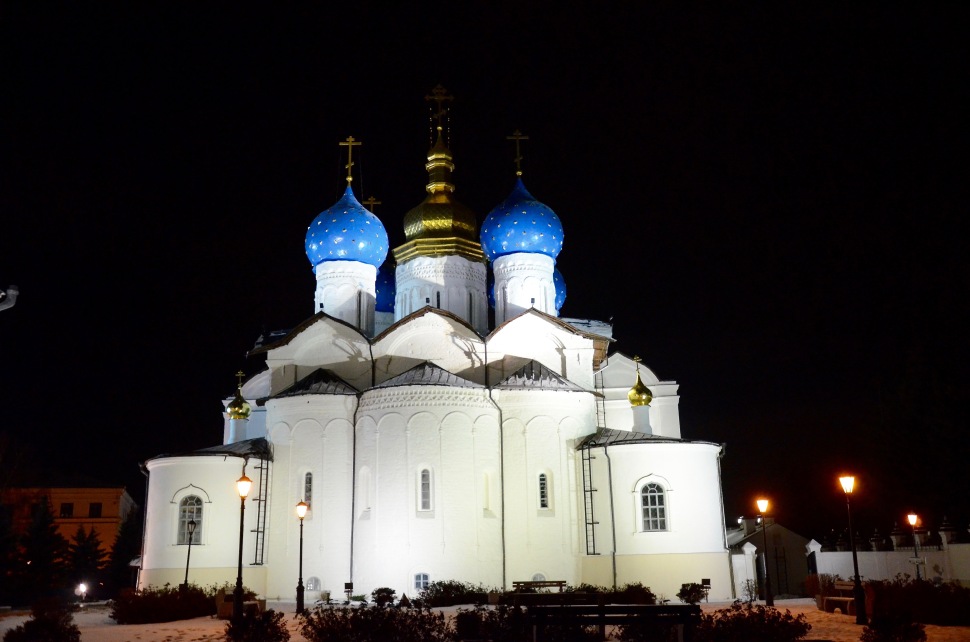 The Ministry of Agriculture

The building of the Ministry of Agriculture is a magnificent work of architecture. Very eclectic with a beautiful massive wrought-iron tree in the centre of the building. The building is located across from the Kremlin, so it can already be spotted from within the Kremlin walls. 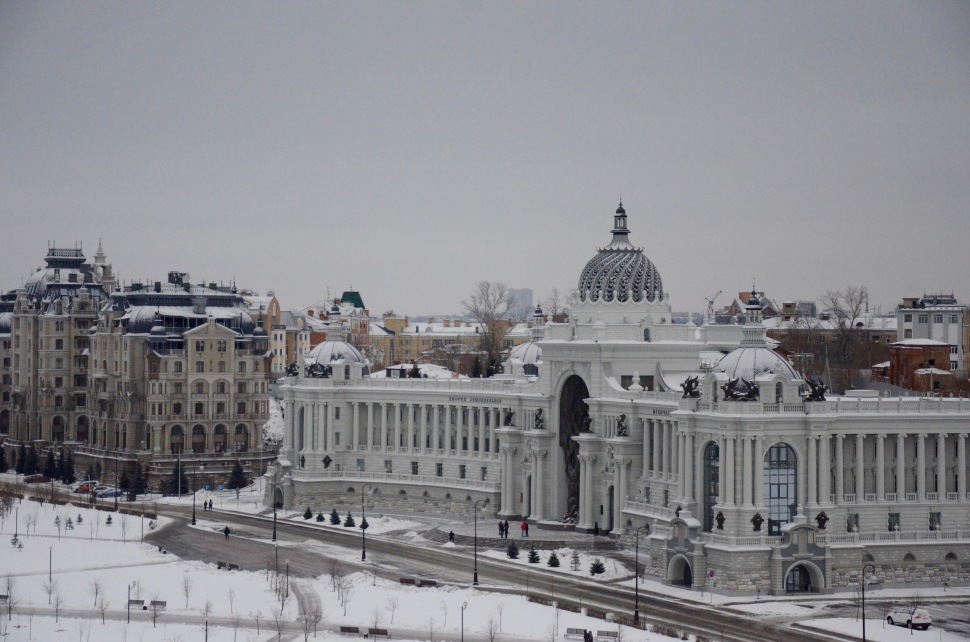 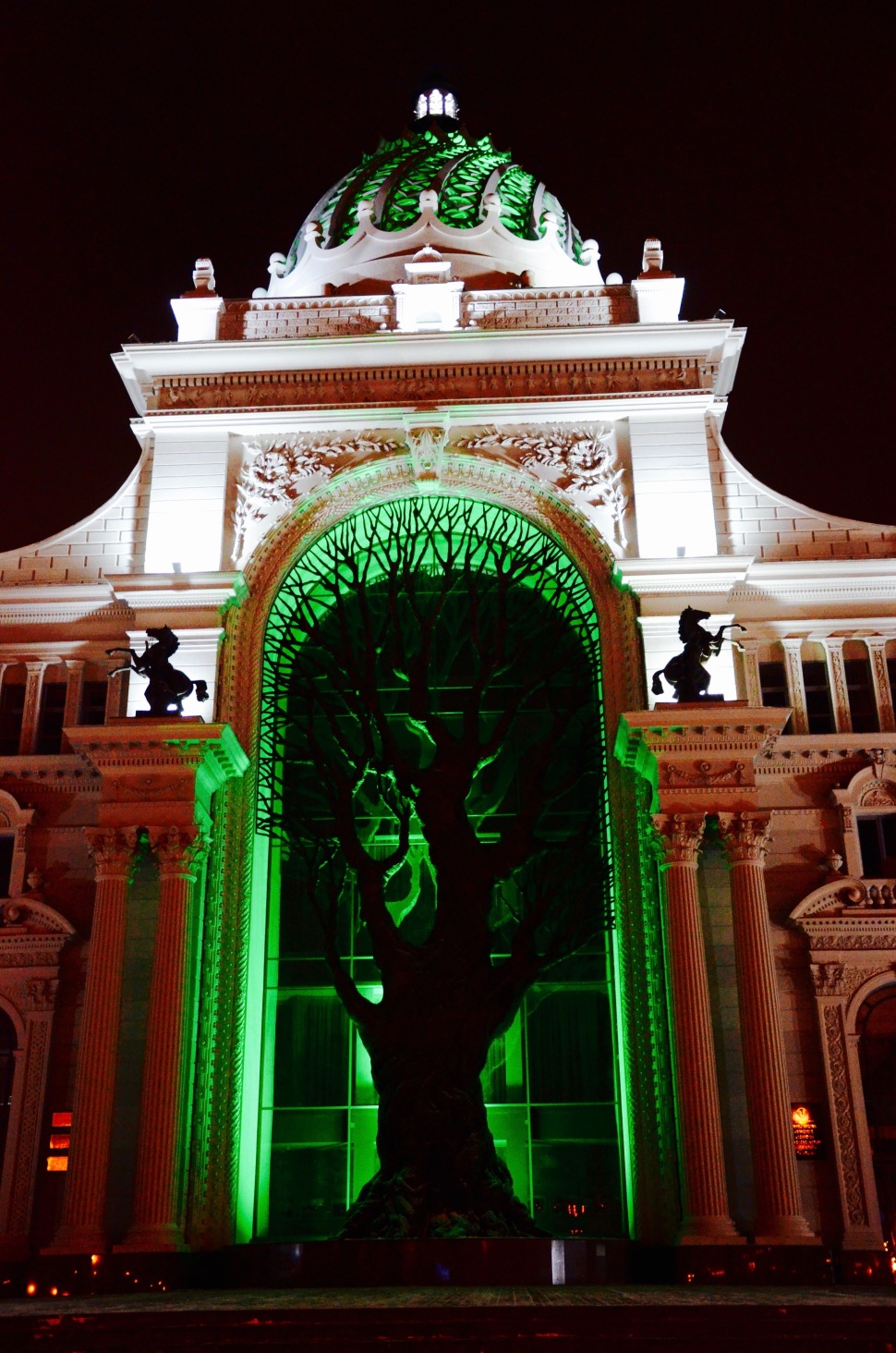 Unfortunately, I cannot tell much about Tatar Food as most of it contains meat. However, I tried soft manti dumplings filled with pumpkins and something else that I can’t remember at the Dom Tatarskoy Kulinarii (House of Tartar Cuisine) where we were able to listen to local live music for some time. We also tried chack-chack – a pastry coated in honeyed sugar syrup – at the Tatarskaya Usadba (Tartar estate). I did not really like the dessert, the place was very nice though and the waiter was very good at English, which is a rarity sometimes.

Kazan was covered in snow and it was freezingly cold. Some streets were covered in ice which made it really tricky to walk without slipping. Nonetheless, the city was magical as parts of it were illuminated in fairy lights. There was even an ice skating rink on next to the river and it was the most beautiful one I’ve seen so far in Russia. Christmas was all around us and we even had a cup of hot cider in a cute little café near the ice rink.

Kazan was a lovely city despite the harsh wind and the freezing temperatures. We explored as much as we could while trying to stay as warm as we could by spending a lot of time inside restaurants and cafes, or taking an uber from A to B.

The Kremlin of Kazan makes a strong statement by having a (orthodox) church next to a mosque. It shows that is possible to live peacefully next to each other despite representing different religions. It was my first time ever inside a mosque and it was really interesting to see it and learn more about it.