In May I spent a wonderful weekend in the UK, mainly in London. However, I have been in England’s capital a few times before, and nostalgia lead me back to another beautiful place that I have visited before: Brighton.

Brighton is located on the south coast of England in East Sussex and has a population of around 285,000 people. It is very easy and fast to reach from London – only a short 1h train ride gets you there quite easily and also affordable if you book a bit in advance, or if you travel during off-peak hours. Actually, ‘Brighton’ is only a short version of the town’s full name: ‘Brighton and Hove’. Both Hove and Brighton joined into unitary authority back in 1997, hence the name. Around 8 million people visit the town in the south every year, and 6.5 mio of them are day trippers.

The town is home to the oldest in continuous use cinema in Britain (Duke of York’s Picture House opened in 1910) and home to many actors, musicians and other figures of public interest such as Nick Cave, Paul McCartney, Cate Blanchett, or Noel Gallagher. It is also considered to be the second most haunted town after York. Back in 1974 Brighton was the place where Abba launched their career – with their victory in the Eurovision Song Contest with their song ‘Waterloo’. Good to know, right? ;) What I really liked this time about my visit was stumbling over a road where all the buildings were covered in street art – it fit perfectly to the street art tour that we did in London the day before. 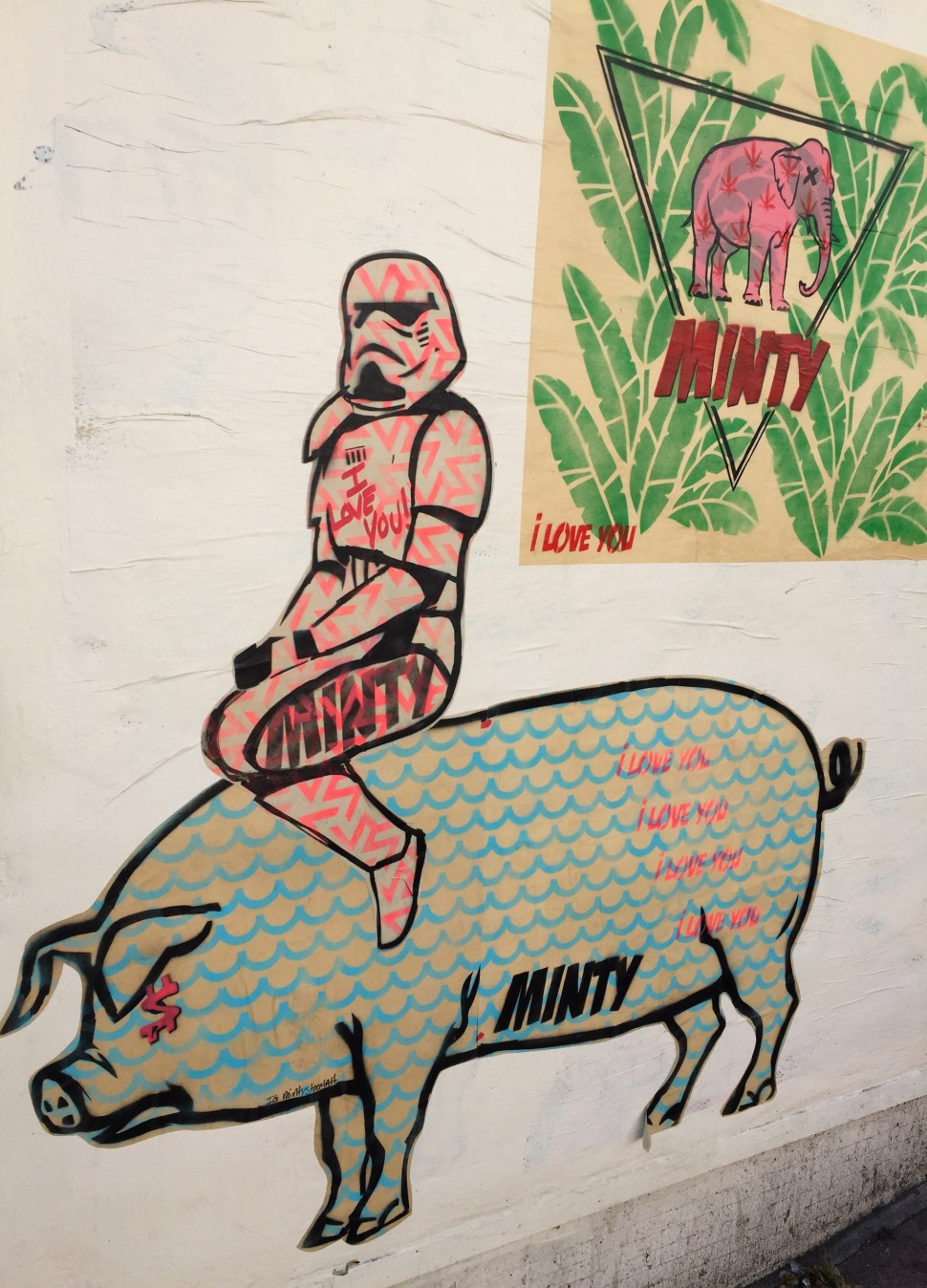 Apparently Brighton has the nickname ‘London by Sea’, it first became fashionable in the late 1700s when Kind George IV became a regular visitor. He was also the one responsible for the beautiful Indian and Oriental inspired Royal Pavilion which was built between 1787-1823 and screams of extravaganza (especially from the inside – at least what I have read).

An absolute must in Brighton is walking through the Lanes. It is the city’s historic quarter, resembling a maze of twisting alleyways that offer a paradise for those who look for small independent shops, boutiques and antique shops. The collection of narrow lanes are great for strolling around aimlessly and having a look into whichever shop one finds interesting. Keep in mind though that most shops are only open til 6pm! 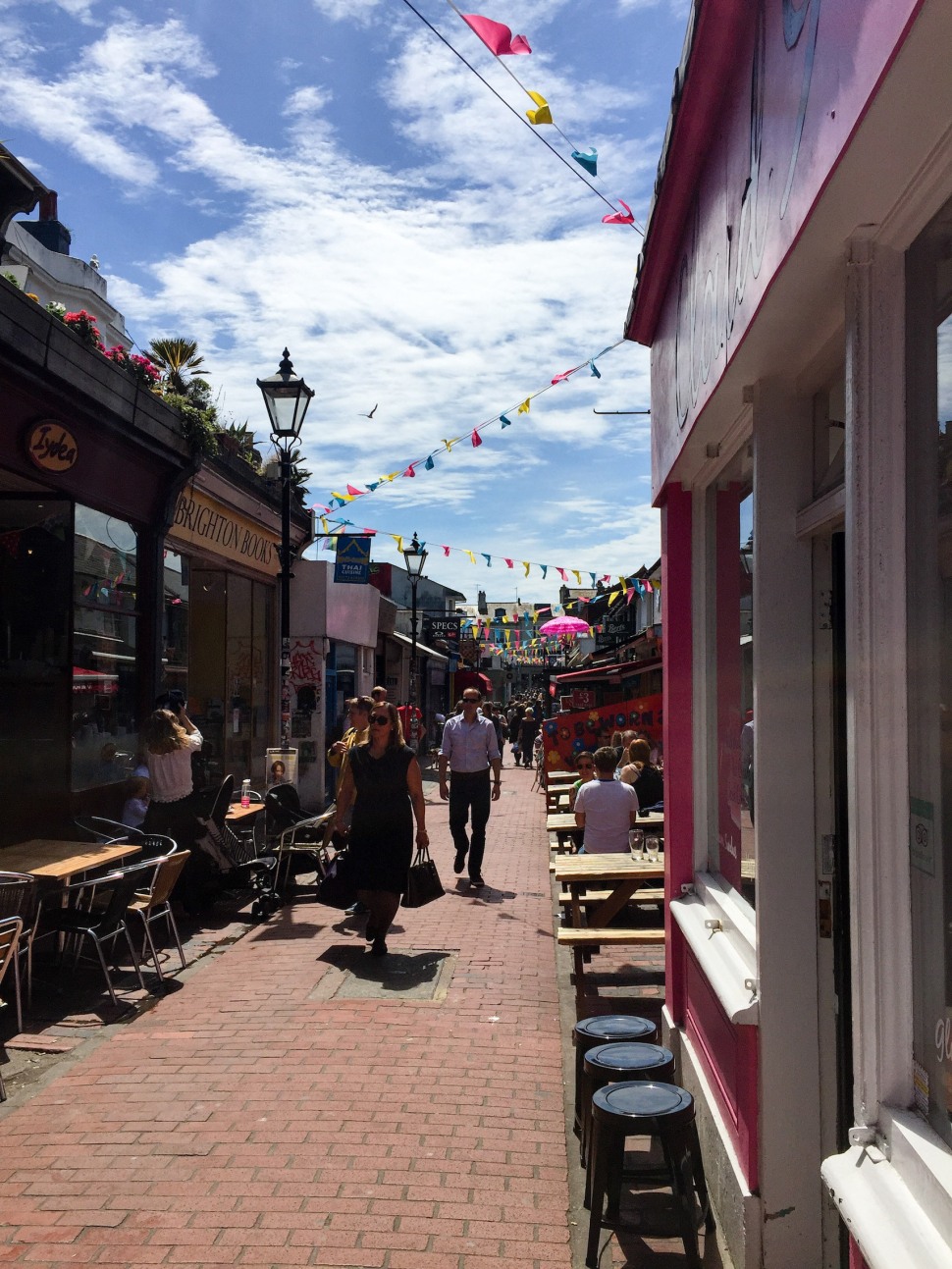 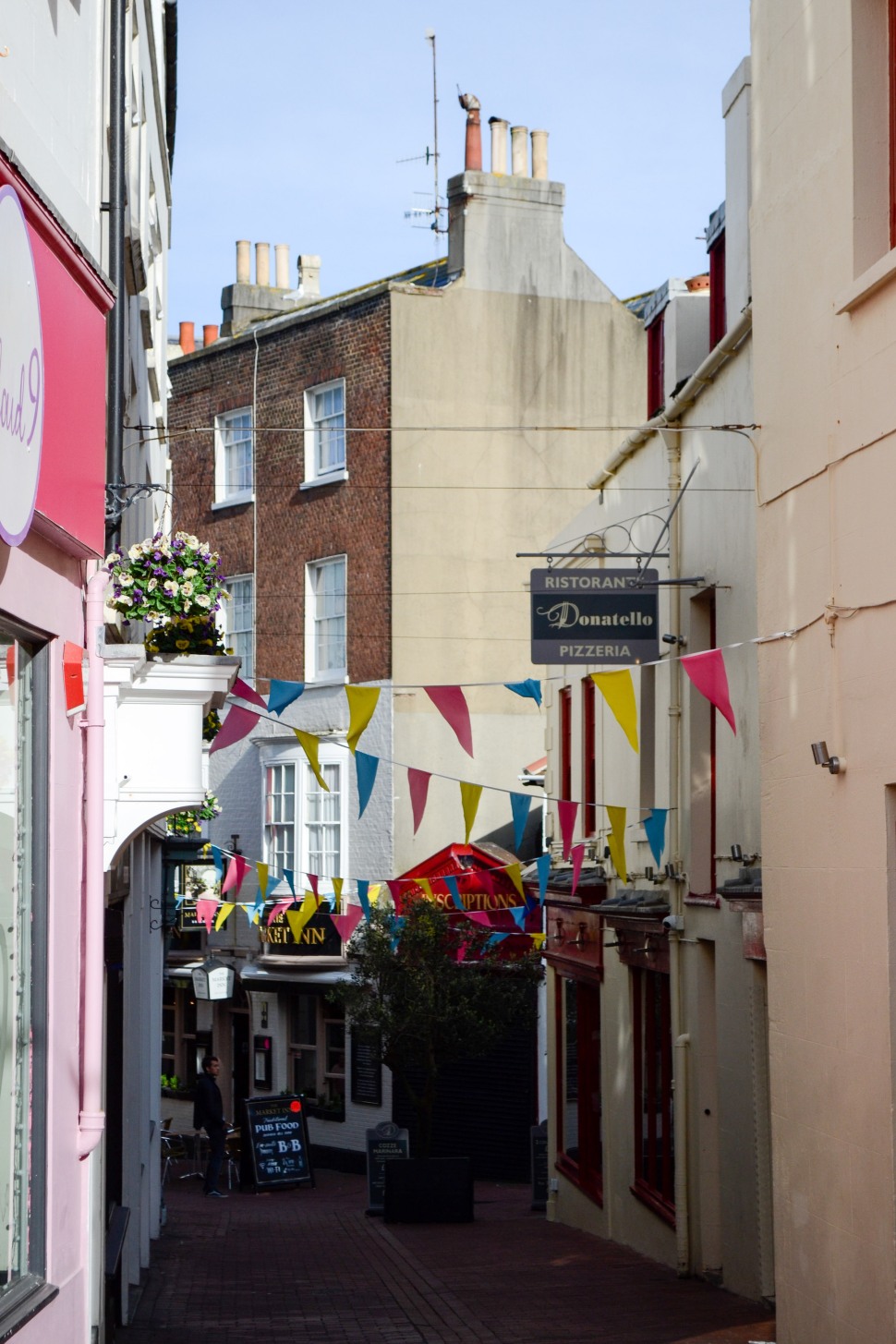 Brighton has more restaurants than any other city in the UK, with a ratio of 1 restaurant to every 250 people, and one of the highest concentrations of vegetarian restaurants. We actually went into one of the most peculiar cafés that we could find: Choccywoccydoodah. Located in the South Lanes of Brighton (but also with a store in London!) this is a place where you ‘step into a world of decadent self indulgence’. They offer handmade chocolates, house style and bespoke cakes, lollies, and bars on the ground floor shop. Upstairs there is a cake garden, a Bar du Chocolate cafe, and various other peculiar rooms. There are no savoury options available, only a sweet menu. We spoilt ourselves with a peanut butter, banana, chocolate ice cream milkshake (big regret – way too much for us – we should have shared this one as well) and were wise enough to share a slice of chocolate cake. Very decadent indeed! 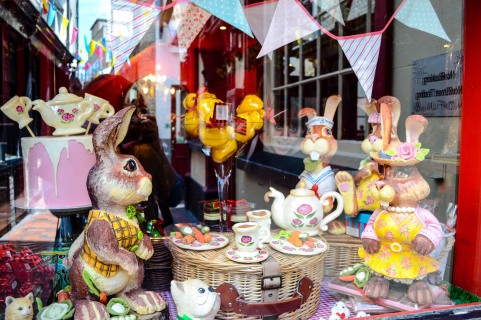 Brighton used to have 3 piers. The Chain Pier only stood between 1823 – 1896 and was the first pier structure that was built in the town. The famous Palace Pier (also called Brighton Pier) – a pleasure pier with funfairs, restaurants and an arcade – opened in 1899 and is still going strong. On Brighton Pier there are apparently 60,000 light bulbs! Its former rival, the West Pier, opened in 1866 but was closed in 1975 and destroyed by storm damage and arson attacks. Now you can only see the iron structure of the burnt out wreck that is still a fascination to some visitors. 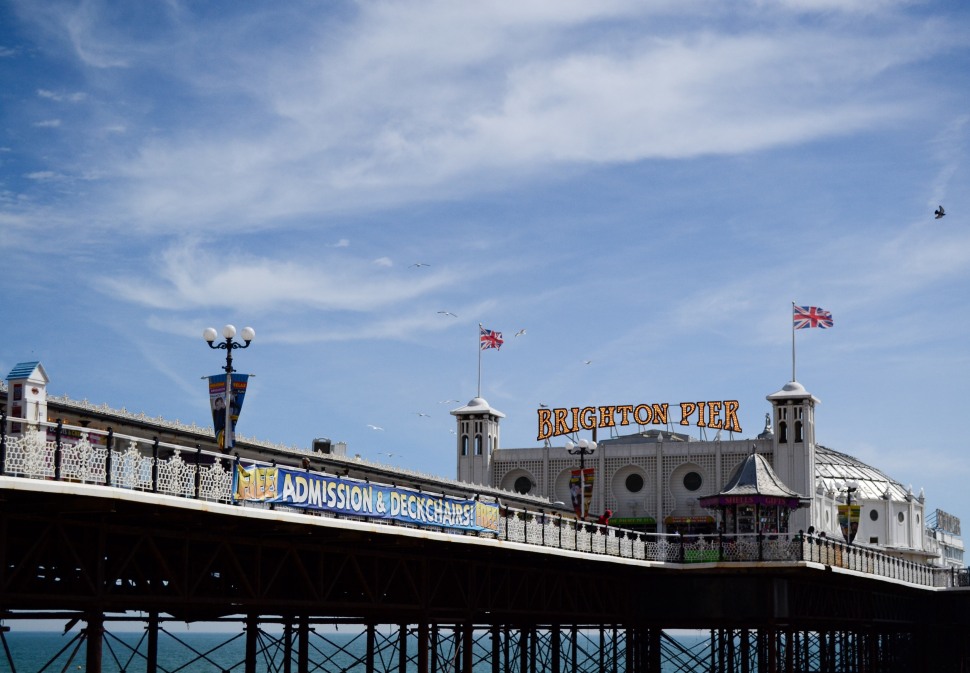 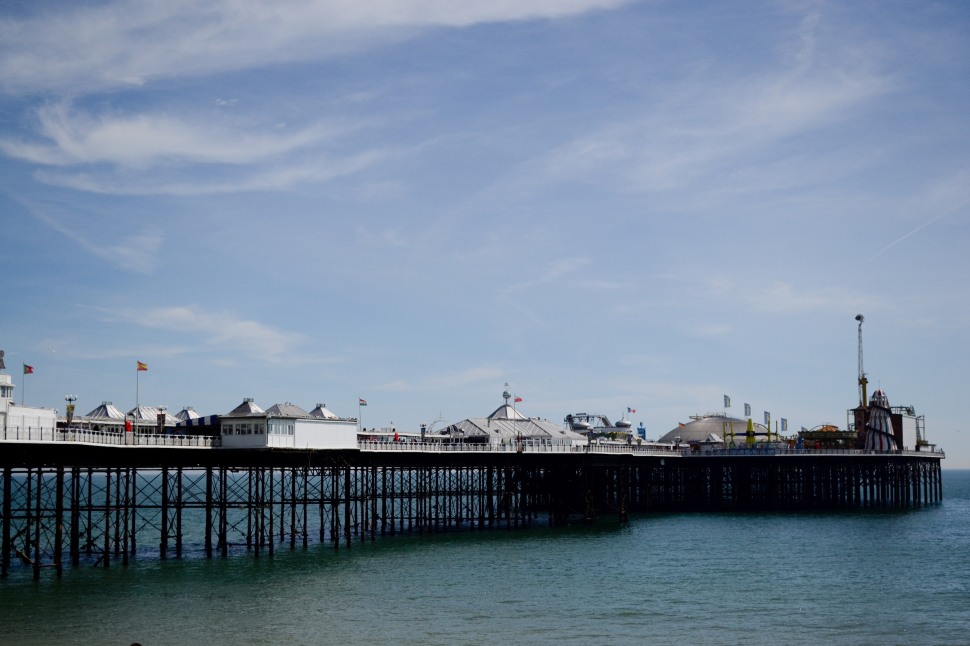 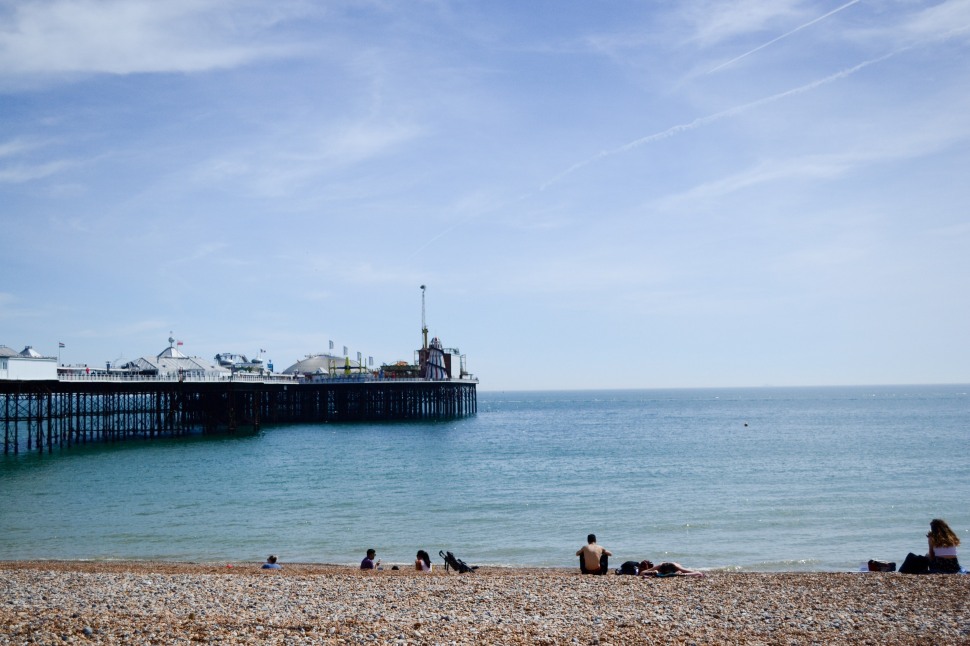 Brighton is still one of my favourite cities of the UK and I am always happy to go there and spend a few hours on the pebble beach. Walking through the Lanes makes me happy, and just the general feeling that I get in the city is a thing that I really like. So if you ever have a day to spare in London, or you want to explore another city in the UK that is easy to reach – go down to Brighton for a day!