Moscow is one of the biggest cities in the world, and it is known for its pompous architecture and great boulevards. Many of the concrete structures are a reminder of past times which are still vivid in the people’s hearts, minds, and memories. One example of such a structure or area is Park Pobedy, a grand park located in the (South-)Western corner of Moscow.

Park Pobedy, or Парк Победы, was constructed in honour of the country’s victory in World War II or, as the Russians remember it, Great Patriotic War. It’s also where the name comes from – Pobeda meaning victory, so it’s the Park of Victory. It is actually a vast memorial complex that includes many monuments, fountains, museums, and a church, synagogue, and mosque. Every year on May 9, Russia celebrates Victory Day in which this park becomes the centre of celebrations.

The park at Poklonnaya Hill is set as a reminder that Russia and its citizen suffered a great deal during the war. The area actually used to be the tallest point of Moscow and was an open-air museum to remind of Russia’s victory over Napoleon. The hill was leveled down to the ground in 1987 and has been gradually turned into the war memorial it is today.

Right at the entrance to the park there is a long promenade that gives a great view over the area and the surrounding city. This big road lined with fountains leads to the obelisk, a war memorial museum and an exhibition of tanks, war planes, and other weaponry. The park ends into a forest.

The park was carefully constructed, and certain numbers were kept in mind when planning it. For example, the central avenue, the “Years of War”, has five terraces which links to the five years of conflict. A total of 1,418 fountains can be found there – one for every day. The memorial chapel, mosque, and synagogue are for the different religions of the fallen soldiers. The height of the obelisk with a statue of Nike, the Greek goddess of Victory, represents every day of Russia’s participation in WWII (141.8 metres, 10 cm for a day). In 2005, 15 pompous bronze columns that symbolise the main fronts and navies of the Red Army were added. 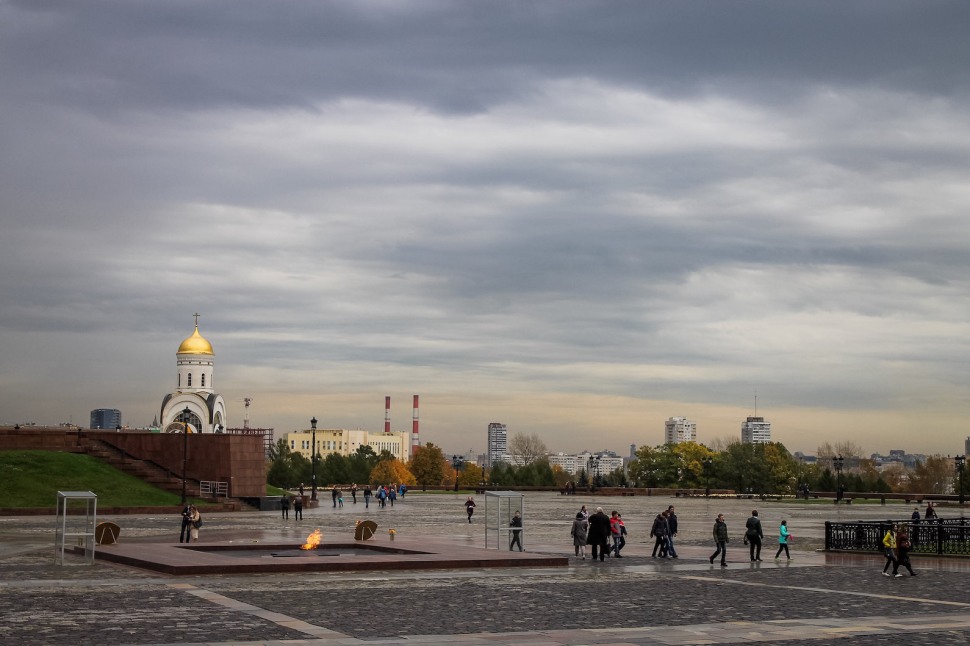 What I especially liked about this park is that it is such a huge “empty” space within such a big city. It is such an interesting feeling that you get when walking around in such a massive park surrounded by skyscrapers. It is a mix of feeling secluded from everything but also being in the middle of a huge town.