When I was planning my summer travel adventures it turned out that I would do most of my travelling only during  July as I had to attend a few things in Austria in August. I just couldn’t have one month full of travelling (abroad) and another one without hardly any travelling at all, could I? So I thought about which places I could go to that would only take me little time on the road but would still be ‘exotic’ and new… So Brno here I came!

Brno is with almost 400,000 inhabitants the second largest city of the Czech Republic and is the centre of the South Moravian Region. It is located in the Southeast of the country, more or less right next to Austria. The city is a centre of universities, science, research and innovation, is known for Gregor Johann Mendel (who discovered the laws of modern genetics) and the Villa Tugendhat (modern architecture landmark listed on the UNESCO World Heritage List). Very intriguing – so why not spend one day in this town?

It took us only around 1.5 hours by train (7.50€ one-way) to get to Brno from Vienna – so it was a perfect day trip in August. Luckily, it wasn’t a typical hot summer day – so the timing of our trip seemed to be perfect. It was a bit clouded, which gave the city and its old buildings the perfect edge.

Climbing the tower of a church
Upon arrival we got ourself a small city guide and loosely followed two suggested routes so we could see mostly all of the major attractions of Brno. One of ours first stops was the cathedral of St. Peter and Paul – a Gothic style church on the Petrov hillock. The tower is open to the public for a small fee, so we climbed the many stairs just so we could have a beautiful view at the city. Definitely worth the scary wooden staircase! 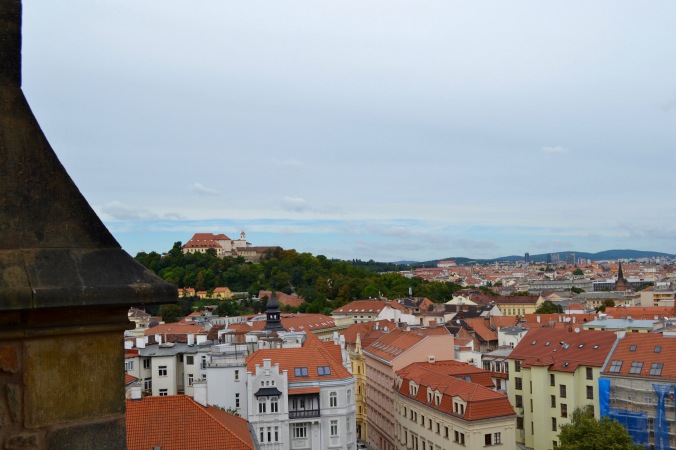 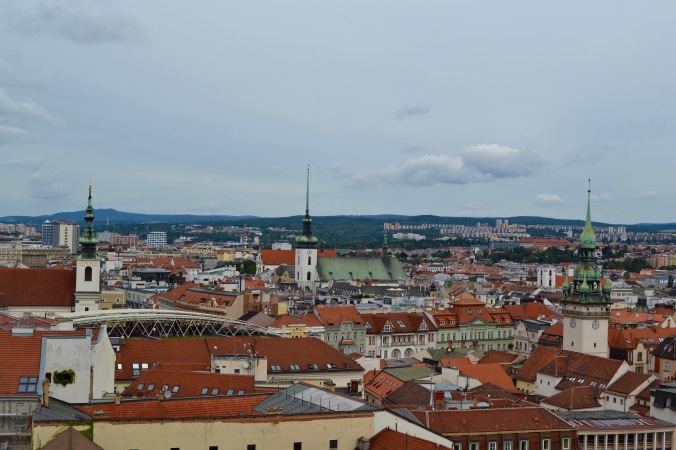 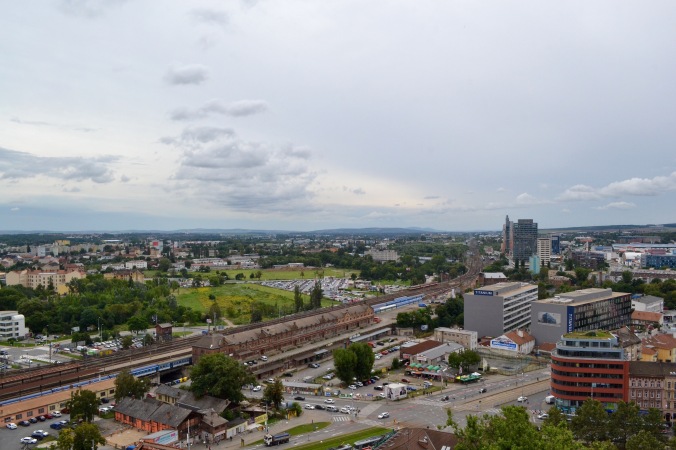 Having a drink in the middle of the day (or not)
Afterwards we just strolled around for a bit, passed countless churches, and then decided to sit down at what seemed like a pop-up bar at the Náměstí Svobody – the main square of the city centre – and enjoyed a fresh lemonade. At 12am we just didn’t feel like having our first Gin Tonic of the day yet even though it was quite tempting ;) 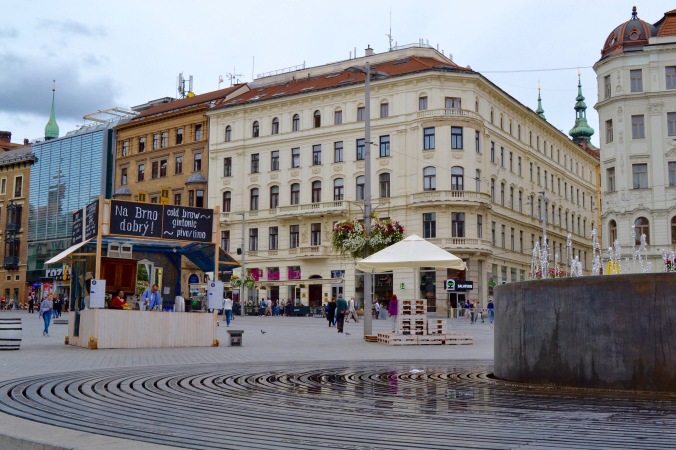 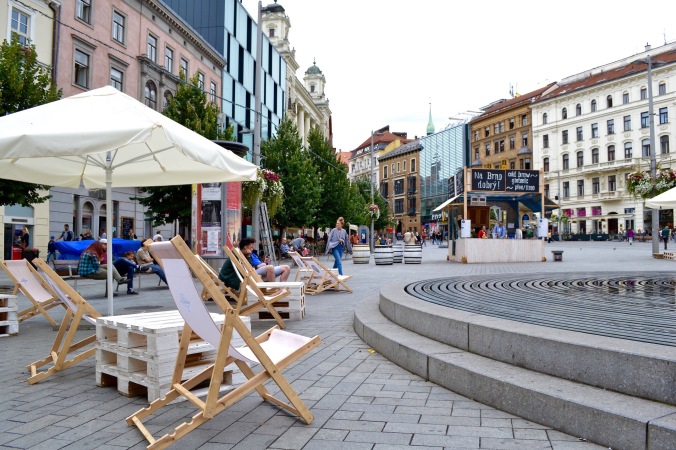 Unfortunate food failure
After the nice little sit-down our way led us past further churches, along shopping streets, past horse statues (?), more churches… until we decided that it was finally time for lunch. I had already looked up a few places the day before so we wouldn’t be at a total loss when it came to vegetarian places. As we were at the northern part of the city centre we opted for a place called Vegalite. This restaurant offers vegetarian and vegan food at cheap prices. Unfortunately, more or less a total bummer for us – but mostly our own fault. We asked the waitress for an English menu and she only gave us a single sheet of paper that had the daily menus for the whole week (which consisted of a soup plus one out of 3 dishes of which one was already sold out). So we were stuck with two dishes that neither of us really liked as leaving the restaurant was impossible due to growling stomachs. Only after having paid we saw a pile of ‘real’ menus (not just the weekly menus) a few tables down. Of course we had one last look at them before leaving the restaurant… Turned out there were many other dishes available that we could have chosen from – burgers, salads, Bohemian etc. but the waitress had failed to give us the ‘real’ menu and we had been too stupid to ask if there was something else. Definite facepalm reaction from our side! So I guess I could recommend the place after all as they offer quite a lot of vegetarian and vegan dishes at a very good price :D 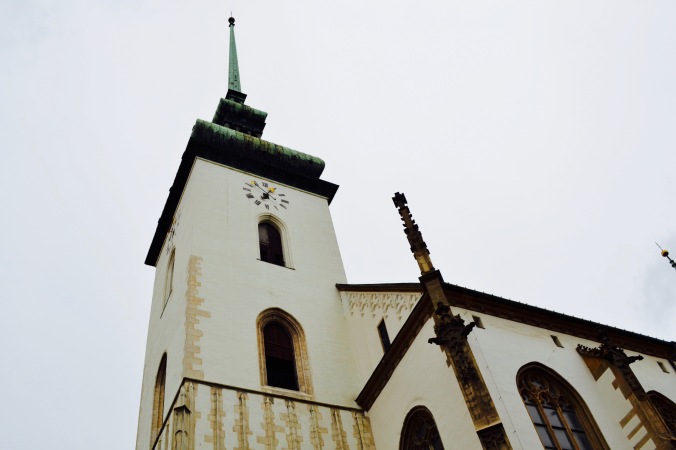 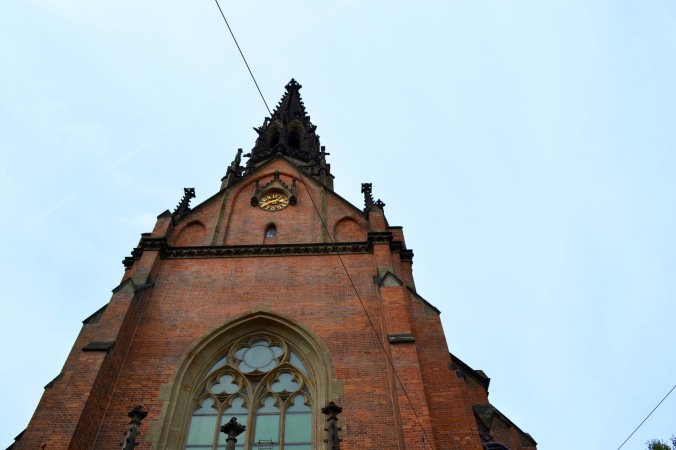 Špilberk Castle
The royal castle of Brno dates back to the 13th century and was rebuilt into a fortress in the 17th century. It used to be the most notorious and harshest prison in the entire Habsburg Monarchy and was known as ‘Jail of Nations’. Now it is ‘just’ home to the Brno City Museum. It is located on a hill which can easily be reached by walking through a vast park. On top of the hill the view over the city was – again – very beautiful and worth the march. However, they could have put a few more benches along the steep paths… :D 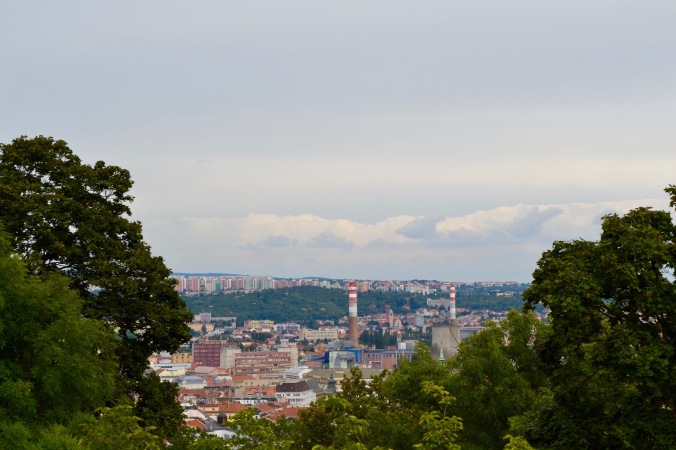 Coffee & cake break
With still time on our hands we went to a place for coffee and cake. Not just any place but the most hip and trendy place in town according to the interior and the people in there – Skøg Urban Hub :D Nevertheless, quite a cool place with delicious coffee and a quite unusual black forest cake that tasted amazing! 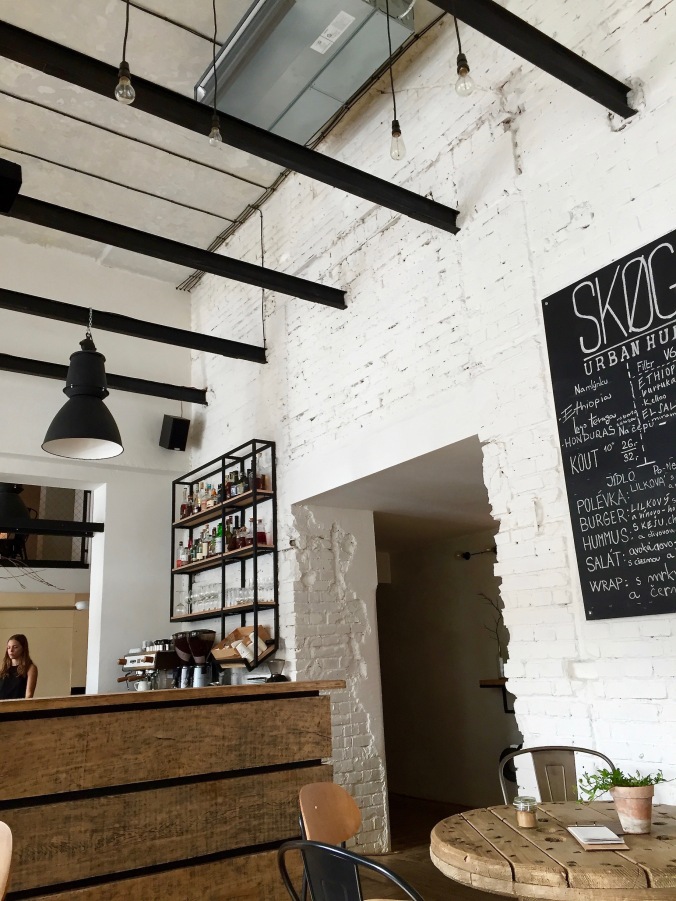 After having coffee we already decided to catch a train back home. On our way to the train station the sun came out but as we had already set our minds on going home we didn’t want to stay just for the sake of a few sunrays. We had a lovely day in Brno (despite the clouds!) and it’s just perfect for a cheap daytrip – as the (food) prices are very low (in comparison with Austria). 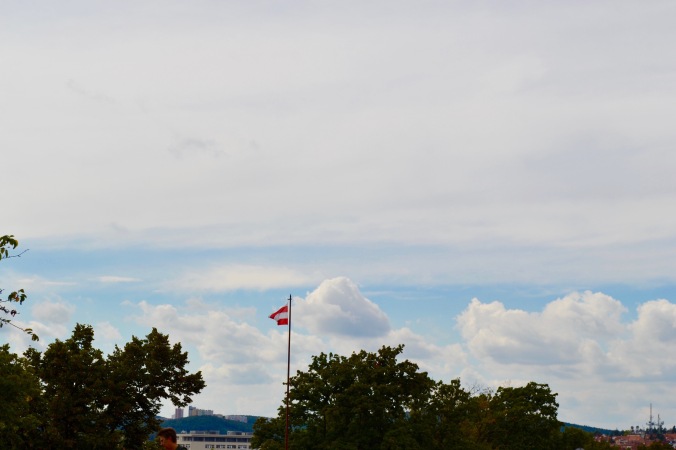